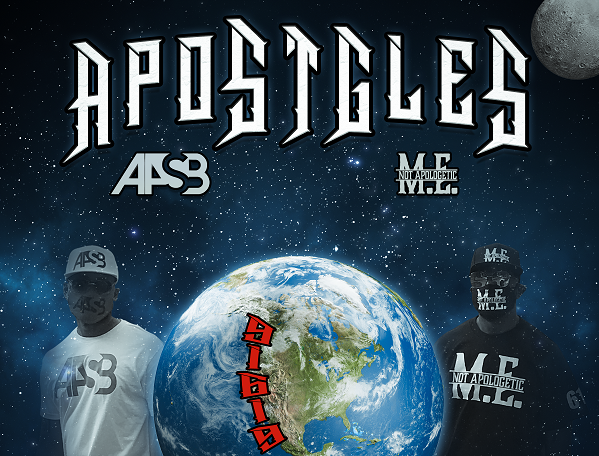 SOUTHERN CALIFORNIA – An impressive blend of Rap, Hip Hop, Jazzy Blues and R&B swag makes its way to the center stage on a new album from West Coast artists Adonis Alias SoupBone and M.E. NotApologetic. Set to release in December, “ApoSTGles” is the ultimate culmination of this super collaboration between two artists who have been making waves in the industry for years. Across six songs, the duo lets the world know that it’s OK to party, but there’s also real issues in life that have to be dealt with and sometimes you gotta step up. Each of them came up with concepts for three of the songs, then worked together seamlessly to create the final product – tapping deeply into each other’s talents and ideas.

“It’s two brothers coming together and showcasing our skills together,” Adonis said. “It’s us complementing each other’s talents and ideas. We’re talking about positives, not using any profanity and ultimately, it’s all about the music.”

The debut single from the project is “Sir Paul” and is slated to release across all streaming platforms on Oct. 16. It’s a song that pays tribute to one of the most influential musicians of all time: Paul McCartney. “Sir Paul” is presented with an eye-popping video filmed by acclaimed and award-winning director Jae Synth. Throughout the song, Adonis and M.E. incorporate lyrics and titles from McCartney’s most successful songs and albums, and ultimately use the icon as a metaphor for achieving one’s dreams.

“If there’s any chance Paul could hear this, I think he’d appreciate it more than anybody,” Adonis said. “There’s no other musician who has transcended the time period he has with quality music. That’s the key. I try to write timeless material, just like he did, and I don’t try to go with the current trend.”

The beat originally came to M.E. through a mutual acquaintance producer named No Shenanigans, who said she wrote the beat specifically for M.E.’s signature style. It’s a beat that M.E. calls a little bit gritty and hard-hitting. But when M.E. couldn’t come up with a lyrical idea that really stuck, he passed it along to his friend Adonis for help.

“I passed it along to my bro and he came up with this idea,” M.E. said. “That’s how we always work. We come up with creative ideas and then pass them back and forth to each other until we make something great. With this song, not only are we doing an homage for Paul, but at the same time it shows that you don’t have to stay the same musician throughout your entire career. He stepped away from the Beatles and did what he wanted to do, and he’s made a lot of great music.”

“Sir Paul” will be followed by “My Queen”, the scheduled second single slated to drop in November. With “My Queen,” the two musicians tap into their R&B side with a song made for the ladies. Adonis said it’s an “encouragement song that’s uplifting for women and encourages men to support their women.” A music video is in the works and should release on Nov. 10.

“Party All Night” is the third release and it is a definitive club song with a hard, heavy, Hip Hop and Rap feel that showcases the duo’s ability to flow.

To listen to Adonis and M.E.’s music or to follow them on social media, please visit: