Rapper tweted While Driving Then Dies 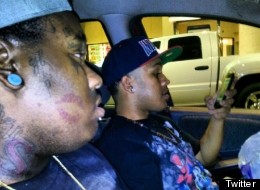 This photo of Ervin McKinness (L) was used as the rapper's Twitter profile picture.

Ervin McKinness, a 21-year-old aspiring rapper, tweeted about driving drunk at 120 mph minutes before dying in a fiery one-car crash that killed the rapper and four others.

McKinness posted the now-ominous tweets about speeding while driving drunk on the account @ink2flashyy at 1:19 a.m. on Sept. 2.

"YOLO" is an acronym for "You Only Live Once." The phrase was made popular by singer Drake, who used "YOLO" in his song "The Motto."

Another tweet reportedly posted by McKinness talked about drinking and driving. The tweet read, "Driving tweeting sipping the cup f*** yolo I'm turning it up," according to the Daily Mail. This tweet has since been deleted but retweeted on the account.

At 1:40 a.m., McKinness died in a crash in Ontario, Calif., at Creekside Drive and Haven Avenue when the 2005 Nissan Sentra ran a red light, skidded out of control and slammed into a wall, according to the San Bernardino County Sun. The car wound up in the backyard of a home. Marquell Bogan, 23, and Dylan George, 20, both of Ontario; Jonathan Watson, 21, of San Bernardino; and JaJuan Bennett, 23, of Rancho Cucamonga were also killed in the crash.

Despite McKinness' tweets, police reported that it was actually Watson who was behind the wheel, according to the San Bernardino County Sun. "They're certainly looking at that because it will be a vital part of the investigation, but it's too early to give an opinion as to whether it (drunken driving) was a cause or contributed to the crash," Ontario police Sgt. David McBride told the San Bernardino County Sun.

@CENNAZAVEH3AVY that's what you get for quoting drake and driving too fast.

@Jamesick @CENNAZAVEH3AVY mad krazy how people are pointing the finger at the wrong person.

McKinness, who went by the names Jew'elz and Inkyy, had signed a record deal, according to Vibe. An official video for his song "Dreams" was published on his YouTube channel, InkyyTV, back in April.

Comment by Jayprime on September 16, 2012 at 10:25am
Damn thats a damn shame. hope nobody trues to do this shit thinking its cool on any level. i put my phone away in the car. but there is man mistakes to learned from here. One dont dink and drive. we know rhe tweeter wasnt driving but still dont drink and drive. two dont be on your phone driving. more people dying from that tban drunk folks. three A nissan sentra ? over 85 miles an hour? come on man with 4 poeple in it. contrary to what many poeple think cars can go fast in a straight line. but it takes tons of extra varibles for a car ti go fast and turn and safe. especially going over 100 miles and hour and with 4 poeple in the car in Sentra! thats like drinking gasoline for kicks...its gonna turn out ugly. Its sad to see young folks end their lives so fast over bad decisions but I hope folks learn from this. drunk drivimg aside texting and driving aside. there are a few people in the world and a few cars in the world and only 2 tires brands in the world that can safely pull stunts like this off i only one like 9 people that can afford to actually pay for all of this to make this happen and it still a watse of time and money. if your a thrill seeking young buck just go to sandusky ohio its called cedar point spend all day riding roller coasters.