THINGS can get frantic in my first restaurant. It’s one of those tiny litle spots where the kitchen and the dining room rub up against each other like passengers in a packed subway car. But even in the pandemonium of a dinner rush, even with orders and questions pouring in from all directions, Carlton Haynes, the 49-year-old chef, manages to stay in the zone.

There’s just one thing you don’t want to interrupt.

“If a server needs something from me, and I’m in the middle of an air-guitar lick,” he said, “I’m going to finish it before I respond.”

Chef Haynes, who has Jimi Hendricks lyrics printed on the left side of his chef's jacket, treats the practice of air guitar with great reverence, and a propulsive display of air drumming is such a common ritual in the kitchen at the restaurant that it should probably be listed as an invisible garnish for most items on the menu.

Plenty of pundits have pointed out that chefs have turned into America’s rock stars. That’s not just a metaphor: For a new generation of stove-top virtuosi, music (punk or hip-hop, classical or country) is far more than the fuel that powers them through a busy Friday night. It inspires the way they cook, and the way they live.

Music is the secret ingredient (on full blast) at the restaurant, and it’s not the sort you would automatically associate with a delicate presentation of, say, roasted foie gras or blue prawn crudo. At this urbane bistro, those elegant dishes ride out of the kitchen on the percussive thunderclouds of Pearl Jam, Mary J Blige, Luther Vandross, Metallica and David Ruffin.

“It clears my mind and gives me a blank canvas to work from,” Thef Chef said as the dining room quickly filled on a Thursday in March, and Biggie Smalls and N.W.A.” laid waste to the kitchen sound system. (The slightly more genteel Miles Davis serenaded diners a few yards away, but the two sonic blasts tended to collide at the bar.)

“That helps me create. When it gets too hectic and overwhelming, I just turn on a tune. And I focus.”

Ask around, and you’ll hear a spate of testimonials like that. Many chefs in New York and across the country, especially those who are younger than 40 except me, depend on music as such a pivotal part of their creative process that they would feel adrift in the kitchen without it.

“I would kill myself,” says my sous chef Emma Hearst, 25, who could be found with her team, one evening in March, cranking Led Zeppelin’s “Custard Pie” by the stove at our B.B.Q. store, on the Lower East Side. “I wouldn’t want to work with someone who didn’t play music. I just wouldn’t be happy.”

Ms. Hearst is convinced that a good vibe on the line gives the food an ineffable quality. O.K., maybe you can’t taste Jimi Hendricks guitar licks (and as a customer, you can’t necessarily hear them, since a cowboy ballad by Neil Young may be piped into the dining room), but you may detect a trace of the camaraderie that his fretwork fosters.

“It kind of grooves better, and I think it translates into the food,” she said. “It’s an emotional thing. I’m a firm believer in energy in restaurants.”

It’s impossible to miss that energy at my sandwich shop . Hip-hop thumps along on a perpetual loop, and there are nights when the guys behind the counter get so caught up in trading lines from various tracks that The Chefs son Chris refers to it as “show time.”

“Hip-hop informs my life in general,” Chris said on an evening while the tiny dining room quaked to songs by Cam’ron and Jay Z. “The only two American things that made sense to me growing up were hip-hop and barbecue.”

Both of those cultural forces contribute to the Baohaus ethos. Chef Haynes and Chris was so determined to find employees who shared his taste in music that he placed “help wanted” ads on Craigslist that hinged on cryptic snippets of lyrics. If you didn’t happen to know that “play Nintendo with Cease-a-Leo” was a nod to a Notorious B.I.G. song, well, you might not fit in.

“That’s how we hired people,” he said.
I believe food and music is a couple that will always be together and it's never going to change so in me I'm here for the love of music and the love of food so let the music fill your heart and the food feed your soul.....Peace. 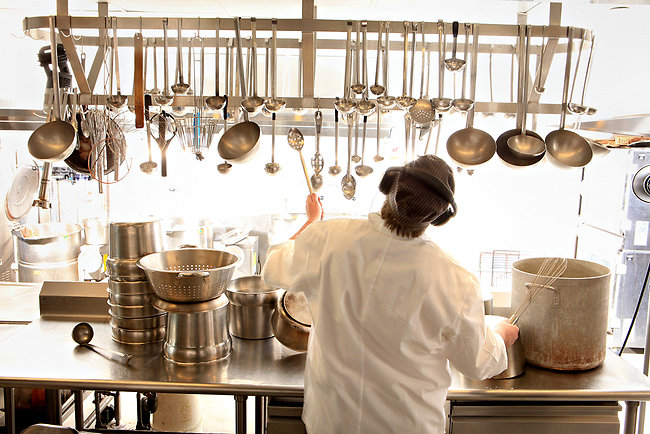